On the first Saturday during my time at JWOC a group of 4 of the TravelAid volunteers (myself included) and our respective interns attended the Clean Water Project. I had no idea of what to expect. The meeting at 7.30am was conducted in Khmer but JWOC staff were keen to elucidate about the project in English throughout the day. 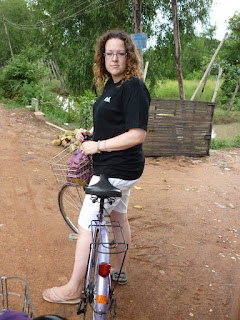 The first shock was getting on the back of the ‘moto,’ which was my first experience of such transport. Luckily all the JWOC interns drove us carefully and safely to the villages. The aim of the morning was to return to where JWOC had installed wells and filters 6 months before and to ensure the process was running smoothly and having the desired effects.

Nothing could have prepared me for the villages, which were a world apart from my life and home in London. The children’s behavior was in stark contrast to the children in Siem Reap or at JWOC, who are always keen to shout ‘hello.’ Instead many children cowered away from me or stood and stared at me – a JWOC officer informed me this was most likely because they had never seen a white person before. In addition I was overwhelmed by the accommodating nature of the people in these villages, who found a place for JWOC workers to sit. I felt rather intrusive walking into their lives and homes, but this didn’t seem to be a problem, I was pleased I had donned my JWOC shirt that day. 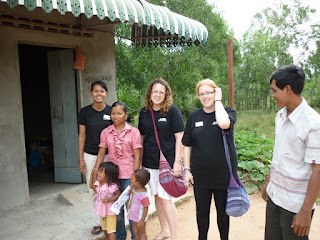 JWOC staff completed questionnaires while speaking to the same representatives of households and villages as they had spoken to 6 months ago, I found it curious that these were always women (most likely because there are the most reliable). The questions were also the same as 6 months before so that comparisons could easily be made. The questions concerned general information such as the number of people in the family and their monthly income! The monthly income of a family of nine worked out at $7.50 a month, this was a real shock to me considering I could easily spend that amount on a single meal or even drink!

Other questions concerned health such as stomach aches, fevers or diarrhea. JWOC staff informed me that the feedback we got showed a marked improvement since the wells and filters had been installed! It would seem that people had really taken on board what they had been shown. It was fascinating to observe how something such as clean water, something so taken for granted in the Western world, can make such a huge impact on the lives in rural Cambodia. I also observed marks on people’s body throughout the village which are circular burns of some description which I was informed is what the people do here if they are sick to rid themselves of ills. This seemed like extremely outdated medicine to my mind and placed the location I was in within a very real context.

As a geography graduate this experience animated years of study concerning ‘bottom-up’, but most importantly sustainable projects. The clean water project that I observed empowers the people of Cambodia both at JWOC and in the villages. It is now within the capabilities of these people to continue such a project and to run others elsewhere. I hope that JWOC continues to take such knowledge to other villages!

A year in Pictures

It has been such an incredible year at Journeys Within Our Community (JWOC) and we would like to share some of our most beautiful photographs with you. So much happens at JWOC in one year and we have done our best to capture the smiles and hard work that happens in...

Chhoeun – Looking back, what have I learnt?

My name is Mao Chhoeun. I come from Kampong Svay District, Kampong Thom Province. I have been volunteering in JWOC for around four years with the Clean Water Project and Microfinance Project beginning in October, 2010. I am very happy to join with the team in Clean...

Welcome to the Clean Water Program! I am Seng the project manager and I started working for JWOC in August 2012. I am very grateful to be part of a program that is so helpful to the community and I am really proud of the work I have done in my time with the Clean...