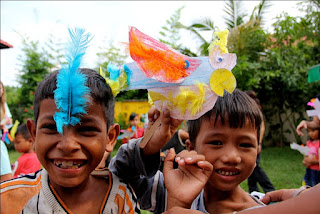 I feel there’s some innate desire in children, no matter what culture
or country they come from, when given feathers, to put them on their
head. Be it stuck behind the ear, in a ponytail, or glued to the
forehead, kids will always find the simplest ways to entertain
themselves. And in a third-world country lacking structure and
intricate forms of entertainment, that’s a good thing.

Last Sunday, a couple of the girls in our group walked next door to
the Journeys Within Our Community school, to join some local children
to do just that. JWOC as we call it, is a non-profit group that
reaches out to the surrounding area through many programs, including
microfinancing, educational classes, and clean water initiatives. On
Sundays during the year, they offer a free arts and crafts class for
local children, a group that ranges in size from 30 during the rainy
season to upwards of 70 during the dry time. It’s not a big
compound—a couple sturdy, beige buildings surrounded by a tall wall.
But in the open center, there’s sinks with footstools and colorful
children’s handprints on the walls and a grassy area showcasing a
vibrant yellow mural that bring the place to life.

When we arrived, we were directed into the recently established
library; a small group of children, staff and a few volunteers were
already in a circle eagerly chattering. The library is made up of two
rooms that are open to each other, one open area with posters on the
walls and the other with a small table, toys and shelves of books. As
the group gathered into a circle, I stood behind them, waiting to snap
the shots of their happy faces. Above my head were decorations made by
the children, strung across the ceiling in an X. Out the glass doors,
I could see the grassy area and mural, a stark contrast to the gloomy
sky. The rainy season is just beginning here so the kids were inside,
but that didn’t stop their overload of energy.

After a couple words in Khmer, the volunteer in the middle spoke
English: “Fish!” and the circle erupted into movement—sucking
noises, pouty lips and hollowed cheeks, and flapping arms walked
around, one behind the other. Then the elephant, swinging arms and
shouts, and then the dog, panting and barking and wagging tails. This
continued for a couple more animals and then it was time for Head,
Shoulders, Knees, and Toes. It’s been a while since most of us ladies
have done the dance; I’m pretty sure the kids had it down better than
we did. We went straight from that to the Hokey Pokey, children and
adults linking arms and spinning around after sticking their left feet
in and shaking them all about.

These exercises help get the kids focused and learn English at the
same time. We’d missed the hand-washing session prior to class, but
we’re told the JWOC teachers help the students and children that come
to the school learn proper hand-washing and basic hygiene techniques
to take back to their homes. The JWOC staff, including the students
they aid with scholarships, give back to their community through their
outreach programs. At home, my service sorority, Gamma Sigma Sigma,
does the same thing. There, it’s a group of girls that are
well-educated at a public university, not exactly struggling to feed
or clothe ourselves. Here, it’s so different seeing these people who
already don’t have that much finding ways to give back.

To calm the kids down but keep the English lessons flowing, the staff
have a story time—a children’s book read out loud, page by page,
first in Khmer and then in English. The kids interact, interjecting
their presumptions about what’s going to happen, or at least that’s
what I think they were saying. I’m not exactly fluent in Khmer. I sat
behind the group, watching as the kids laughed and smiled at each
other, trying to take in the story and repeat the English words. After
taking four languages myself, it was refreshing to see enthusiasm in
their eyes where as most people my age are burnt out and just say,
“Ugh, English please?”

And then the feathers came in. One of the staff got up in front of the
group, pulled a carefully constructed, paper bird on a popsicle stick,
feathers across its body and a fastener in its wing to provide
movement. After a few minutes explaining how to make the bird in
Khmer, holding up the varying tools provided, the kids grouped
themselves around cardboard lids full of crayons, gluesticks and
scissors and went to work. Kaitlyn and I sat in one group of
particularly quiet kids who were extremely focused on making the best
birds. Kaitlyn actually had to look on to the little boy on her left,
following his moves to get hers done.

I’d resigned myself to just take pictures and observe, provide my help
if needed, but the little girl to my right had on a sad look and gave
up after her first cut into the paper. No more than 5, she’d obviously
grown bored with the process but longingly watched as everyone else
started to bring their creations to life. Despite my reservations and
the language barrier, I took the paper from her and began cutting out
the shapes. She gave me a little smile. After I glued the circles and
rectangles together and put the metal fastener in the wing, I got
another smile. When I picked out the feathers and tried to glue them
on myself, I got a frown. She wanted to do that part.

With the popsicle stick and googly-eye as the final touch, she had a
bird to run around with like everyone else. She wasn’t a very
emotional girl, but I got enough happy faces from her to call it a
success. As I turned away from her to check out the crowd, that’s when
I realized and missed the simple joys of being a child. If I could
glue feathers to my forehead, maybe some googly-eyes and laugh with my
friends about it, I’d probably be happy as a clam too. Needless to
say, as the group rushed outside in the emerging sunshine, I grabbed a
yellow feather and stuck it behind my ear, just for good measure.

The kids danced around the yard, flapping their birds, poking each
other and smiling, and then hamming it up for my camera. When I
hunkered down to get eye-level, I got ambushed. Paper birds and little
hands whacking my camera, falling off balance but still trying to
catch every moment. I don’t think I’ve ever seen so much happiness
from children, and I’ve volunteered at countless summer camps. They
were all so excited to see their picture when I opened the screen for
them—I assume most of them haven’t ever seen themselves captured
like that before. As we walked away to shouts of good-bye and many
skinny, tan arms waving, I was reminded of why I came here. This is a
once-in-a-lifetime opportunity, to study, to help, to tell a an entire
country’s story, and I can’t believe how much of it I’ve already
experienced in less than two weeks.