Discover what Yann Yon had to say; another winner of JWOC’s International Women’s Day competition

Let’s discover what Yon, another of the winners, had to say in response to the question “What is it like to be a woman in Cambodia in 2012?”  The essays were not judged on the accuracy of the information, the grammatical structure or being inline with views held by JWOC or myself. I was simply looking for students who had tried really hard to express their views, whatever they were, which is not easy when learning a new language. Jackie, EVM, JWOC.
Winner of the male over 18 category
All women in the world want to live in a good condition and don’t want to be look down from the men. Especially women in Cambodia they really want to live in the same right as they men also. It means they want to get a right to protect themselves from looking down of societies and family fighting.
One more thing the life for women in Cambodia before were very difficulty; especially the women who lived in the countryside most of them were farmers who worked very hard all days in the field and some women got widow of the war.  So they have to tried to work hard to earn money for their families. So some of their children have to drop out of school in order to find the jobs in the city and town or to worked at home for helped their families. Some of women were looked down by their husbands and some were hit by their husbands and other had HIV because of their husbands. However the women who lived in the city were very lucky they didn’t to work hard like women in countryside. That time ago the women lived bitterly with bad conditions for their live, they didn’t have equal right as men did.
However Cambodia in 2012 people live in the modern time. Women have changed their faces because they play in the important roles not only in the families but also in societies. According to my observation most women have become leader because they have had equal right to accept high education and have job to earn for their living. Moreover some Cambodian women have become doctor the member of parliament and leader and some have become manager of companies and some have done like men also. So in the name of I am one of the men and Cambodian we have to give the right chances for women and help them to live in the same equal right as men do. As a slogan said “Ladies are the mother of the world” So women themselves have to study hard to have enough abilities to work in modern societies in 2012.
By Yann Yon, aged 19 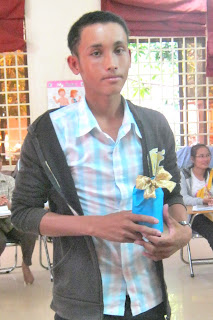