Ellie, a member of the TravelAid team from Oxford University,writes here about what she learnt and loved during her month with JWOC…. 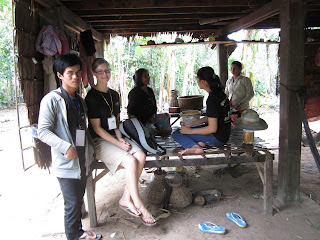 Finishing university was a daunting prospect, and the knowledge that I would be leaving England almost immediately after to spend a month volunteering in Cambodia (a country I knew almost nothing about) made it even more so! However, JWOC has proved to be an incredible experience, with experiences and challenges that were always exciting and rewarding.
The month began with us meeting our Khmer interns, which involved playing various team-building games to get to know each other. Having been involved I various theatre productions, I am well acquainted with these sorts of games, but playing them with people who do not speak the same language fluently, and in the Cambodian heat, was a very new experience!
I was paired with a boy called Khin, who has been a great help and friend throughout my time at JWOC. Khin, a 23 year-old from Prey Veng province in Siem Reap, is the youngest in a large family, with 2 sisters and 7 brothers. He is currently teaching at a nearby school, and although he had originally wanted to become a business man, his dream is now changing, and he hopes to go to university. Working at JWOC on this summer school will help him in this, as this valuable experience will improve his applications for a scholarship. Throughout the summer school, Khin proved to be an enormous help – the three years he spent as a monk have left him with a calm and accepting demeanor, which was certainly helpful when working with the children! 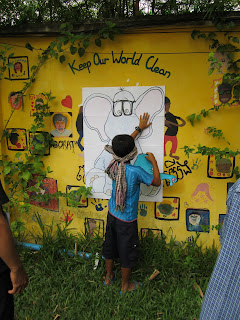 The summer school itself, and the children who attended, was a delight from start to finish. As we began planning, we found games and songs that we learnt as children come flooding back to us. The project was daunting initially, as we were given complete freedom to plan and carry out the activities ourselves. At first this left us feeling somewhat overwhelmed with the task before us – none of us had ever been responsible for over 30 children with few guidelines before! But as the month progressed we found ourselves rising to the challenge. Although we found that we had simply not planned enough activities for the first few days, we successfully worked together to find new ways to entertain the children. By the end of the month we were all confident and accomplished at running the activities. 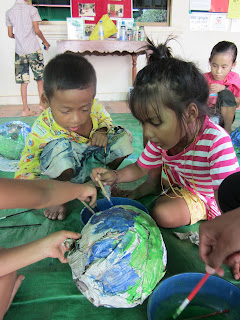 We tried to incorporate arts and crafts into each of the days, as many of the children came from a severely deprived background, where such luxuries as coloured paper, crayons, and glitter pens do not feature. As part of the advertising for our summer school we visited the nearby village where most of the children live. This was a harrowing experience; I had never seen such levels of poverty before, and it contrasted sharply with the happy, affectionate children who attended JWOC. Throughout the month the children were unfailing smiling and friendly, and we all formed strong bonds with them. Despite their lack of previous opportunities to partake in many arts and crafts activities, they took to them with gusto, and produced an astounding range of pictures and models, from papier mâche globes, to animal masks, as well as countless drawings. A firm favourite was making friendship bracelets, which everyone loved! 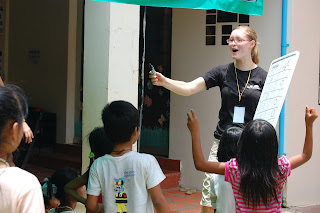 As well as these activities, every day included songs and games, and the children quickly established their favourites: Head, Shoulders, Knees and Toes (sung at various speeds and volumes!) and Splat became regulars. We played numerous party games, and also discovered their enjoyment for word games, such as Hangman, Pictionary, and Bingo. The Khmer interns also taught us various Khmer games which were a huge success with the children. One of the best mornings was at the end of the week themed ‘Around the World’, when we held a mini-Olympics. The children were split into two teams – team UK and team Cambodia – and competed in various races, such as the sack race, the three-legged race, and memorably the wheelbarrow race. It was a happy ending with the two teams drawing, and medals (which the children had made the previous day) being awarded to everyone.
Alongside all of this, we were also given the opportunity to observe some of the many amazing projects that JWOC is involved with, such as the Clean Water project, and the Microfinance project. These trips gave us further opportunities to meet Khmer students, and to observe traditional Khmer lifestyles. We were also charged with painting a new mural, which was hugely enjoyable, and a source of endless fascination to the children.
My time at JWOC has been simply incredible. Although the summer school was daunting, being given this degree of freedom is an opportunity that I haven’t had before, and I’ve loved every minute of it. 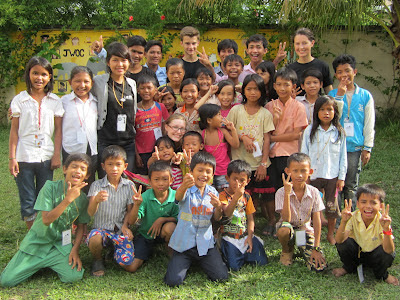