One evening last week Narla and I headed into the squatters village on his motorbike to meet with a man that sells herbal medicine. I had an editor interested in such things and wanted to check it out before sending a guest out to see it. The squatters village sits behind Journeys Within and JWOC and really started growing when we first moved to Siem Reap seven years ago. Those living in the squatters village all have stories of why they’re there, each one seemingly sadder than the next…a sick husband in hospital and everything sold to pay for his care, only for him to die and leave the family destitute; a youngest brother who can’t farm along with his older brothers because there just isn’t enough land to go around; drugs, alcohol, depression. JWOC has a presence here, many of the squatters are our microfinance project loan recipients and clean water project wells dot the community offering at least clean water in otherwise squalid conditions. 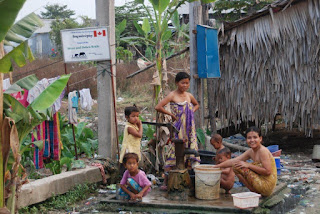 As we drove through I was again shocked by the trash, the amount of children and the general chaos that comes from too many people living in too small a space. I can’t imagine a childhood spent here. Narla and I left the village agreeing that for the over 3000 people now living here, life was bleak.
The next day happened to be my first Music and Movement class in the new JWOC library. I have had my kids in music classes since they were little…kinder music, mommy and me music time, nursery music and so on. Each time we were back in the States we enrolled in a different class and I loved to see my little ones clapping to the beat, dancing with scarves or pretending to be a kitty cat. I had always wanted to run a music and dance class at JWOC, but we hadn’t had the space. Now we do!

For the first class we didn’t do sign ups, we decided to run it as a drop in class and we advertised in our other classes. Part of the reason we did not have sign ups was we knew no kid would know what such a class was and might be scared off. Class was on Tuesday, from 3 to 4…I was nervous! At 2:45 there were only a few kids reading in the library, at 2:55 there were a few more, but by 3pm when we started our stretches we had about 20 kids and by the end of class, we had 45! That’s right, 45 kids from the age of 3 to 13, dancing, singing and playing silly games. 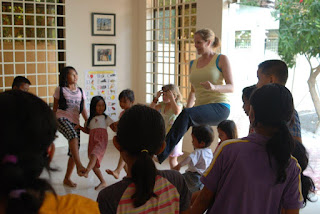 Andrea teaching Music and Movement in the new JWOC Library
It was a joyous hour, we played little games for the kids, played freeze tag with everyone and we sang songs and pretended to be different animals. We talked about ballet and even practiced a few sashays. The older kids helped the little ones and the little ones’ excitement infected the cooler older kids, even the teenage boys were up on their tippy toes practicing their ballet. 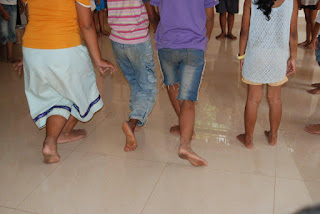 Throughout the class I recognized kids from the squatters village. Some had ripped clothes, others had filthy clothes, a few of the little ones had no pants, but for one hour none of it mattered, we just played.

It struck me how important this new library was. An escape from a home life that was less than they deserved, a chance to be kids and just have fun, a chance to relax and learn in a safe and clean place with a strong fan and clean floors. 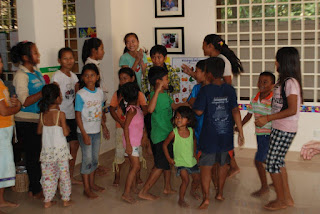 Students enjoying their new library space
After class the kids all thanked me and then many of them went and got books and a teddy bear and found a corner in the library to read in. I am so proud that we have this space for them and that we are giving kids the opportunity to be kids…it makes me so happy I want to dance…which is lucky since the kids all requested hip hop as the theme for next weeks class!!!