Let’s meet Kheurndiya, one of the winners and see what she had to say in response to the question “What is it like to be a woman in Cambodia in 2012?”  The essays were not judged on the accuracy of the information, the grammatical structure or being inline with views held by JWOC or myself. I was simply looking for students who had tried really hard to express their views, whatever they were, which is not easy when learning a new language. Jackie, EVM, JWOC.
Winner of the female aged under 18 category
Women play important role in Cambodia. They are the main people in their families and communities. In the past our society seem to be injustice between men and women. In their opinion women’s obligations are stay at home and look after children. Specially most people during that time thought women had no abilities to work out like the men. In the same way, some parents did not allow their daughters to go to school, in the opposite way they gave the chance to their sons, because they thought men with good educate would have a good job in the future.  For women, even they get high education they won’t get the better job than being a house wife.
But nowadays everything has been change. Specially in the recently. Women has transformed their faces. They run away from the old thing the old costume. They are a good mother. They work hard all day even at home and at work place. They care, love, worry about the member in family in particularly their children.  They have to make sure if their child have enough food to eat if they happy be healthy sometime, they also forget to look after themselves because of her worried about her family. For community, she join in government role. In order to developed their country. To sum up women is very active in our country.
by Kheurndiya, aged 15 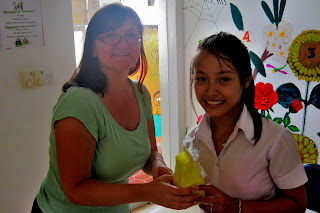 Kheurndiya being presented with her prize.