Conversation Class is an adult’s English class held four times a week. During out time at JWOC, the Travelaid volunteers were given the chance to sit in on these lessons, spreading ourselves amongst the students, chatting to them before and after the lessons and helping them with whatever task was at hand in class.

From the very first class that we attended, the students’ enthusiasm was immediately noticeable and was really quite infectious. It was clear how much they valued the chance to practice their language skills with native English speakers and how important it was for them to learn the language in the first place. 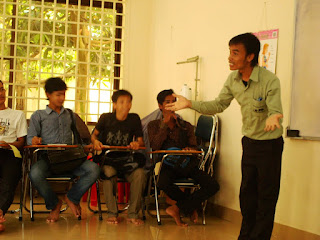 What I particularly found most interesting about the class was the opportunity to speak to the students about their background and their lives. One particular story that really stuck with me was that of a student who had been living in one of the surrounding villages for around five years when the landowner decided to forcibly evict the villagers from the land. This was perhaps the third time that this had happened to him in his life, and it was this that prompted him to start to learn English. For him this was the first stage in protecting the homes of his fellow villagers. He hopes to become a lawyer so that he can become able to represent the voiceless people of his village by fighting the case himself. This story, among many of the others that I heard, made me realize how empowering the ability to speak English in the developing world really is. 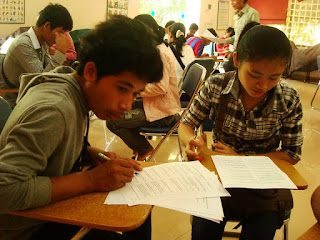 This was just one story out of dozens explaining the eagerness of each and every student, most of them having to take time out of their overly busy days and make the long journey to JWOC on a daily basis. The raw enthusiasm and overt appreciation of the students for the opportunity to practice speaking in English, not only to learn the language but also to gain exposure to completely different cultures and to enlighten us to the intricacies of Khmer culture, language and way of life. 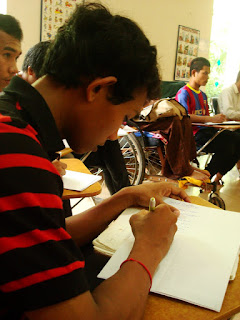 When we first arrived at JWOC, we were given a lesson in basic Khmer. The expressions that did stick were incredibly useful in the month I spent in Cambodia – bartering would not have been nearly as successful without the ability to make countless shop keepers and tuk-tuk drivers burst out with laughter at my exclamation of ‘Klein na!’. But the difficulty of learning a new language so different to your own and remembering even half of the phrases and vocabulary that we were taught was brought back to life and only made it more impressive that after every class the students would come back the next day having remembered all of the vocabulary that they had been taught previously. My feeble attempts to learn from the students the words that they had learnt in Conversation Class in Khmer not only provided everyone with some amusement after class, but also made me realise that learning English was not something they did purely to increase their prospects for a job but that it helped them communicate with those from outside of their communities, sharing stories and experiences and gaining exposure to the wider world. 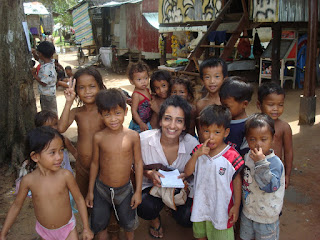 Sakina advertising the summer activities in the nearby village.