From a very young age I have played sporty type games with parents at home and friends in the playground so was really keen to do some sport sessions within our activities camp. Entertaining the younger ones with games out on the dirt field was easy and great fun – anything that involved lots of energy and competition was a hit! Nowadays nearly all sport that I take part in back home is very structured and rule based so I was initially quite surprised at how difficult it was to get the older ones to get involved and enthusiastic about structured sport. The boys were happy just playing football all the time but it was especially difficult to get the girls to participate in large matches of volleyball, football or dodgeball. All loved the running/tag based games but they were clearly not used to being asked to play sport matches as part of a large team. 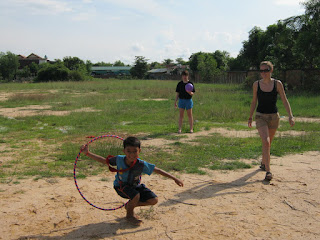 I was especially surprised when I tried to get a game of volleyball going with just the girls, that, despite it being one of their national sports, most were not interested and had clearly never really played it before. In the end we found it best to build up to ball sports gradually by introducing a ball or bat into relay races or fun games. They seemed to really get into these and the girls even managed some simple netball drills, although some, which I thought were quite natural and easy, were clearly very foreign to them! By the end we were able to get everyone involved in a dodgeball match and even tried rounders once. However, playground type games such as bulldog, cat and mouse and stuck in the mud always proved the most popular – perhaps because they are most similar to Cambodian games of which we were taught a few and were always a great laugh.