JWOC goes to the Cambodian Science and Engineering Fair!

I introduced myself a month ago and talked about working to bring science to JWOC, but I wanted to post again to tell about my favorite experience so far in Cambodia! Last week I had the opportunity to represent JWOC at the 2nd Cambodian Science and Engineering Festival, where our goal was to showcase JWOC’s science program and inspire visitors about the possibilities afforded by science, technology, engineering, and math (more commonly known as STEM). We prepared six exhibits; each covering a different topic. We wanted our exhibits, covering everything from electricity to biology to chemistry, to teach something new while allowing students to get hands on.Aside from me the team consisted of Nesa and Vantha, two JWOC staff members, and Phally and Thoeu, two JWOC scholarship students. Each did an incredible job all week explaining in Khmer to students about our demonstrations!

The first day of our trip we took the long six hour drive to Phnom Penh, got our booth ready, and went to bed early, ready for a busy week. Our goal on the first day was to teach two things: first, the reasons for the differences between plant and animal cells and second, how plants drink using capillary action. To teach the first we had students look through two microscopes showing plant and animal cells and think about the benefits a cell wall offers plants. For the second, we had students guess and discuss why cabbage is stained different colors when left in colored water.We weren’t exactly sure what to expect, but we hoped kids would enjoy our demonstrations. Luckily, immediately after the doors opened (and constantly for the next three days), we had a circle of students surrounding our booth! It was clear just from the looks on their faces that kids were enjoying learning in a hands-on manner.

Throughout our time at the fair, that didn’t change. We alternated exhibits, showing something slightly different each day, but no matter what we had on display we never seemed to run out of smiling and laughing kids as they played with the exhibits and talked to us. Probably the most popular exhibit was Oobleck (look it up!), a non-newtonian fluid that is either a liquid or a solid, depending on whether you apply pressure to it. The last two days we had bowls of Oobleck out for students to play with while investigating the material’sproperties, and they could not get enough of it. It was a bit messy, but it was worth it to see the surprised and curious faces as students tried to figure out why the Oobleck flowed like a liquid, but turned into a solid ball when squeezed. I don’t know who had more fun, the kids or us at the booth, trying to explain it! By the end of the third day, we were exhausted from having spent three full days at the fair, but thoroughly happy that we were able to be involved. 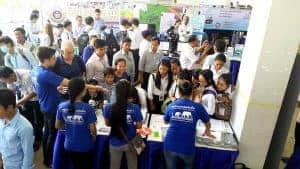 Stepping back a bit, I want to talk about why the science fair was so meaningful for me.The slogan for the science fair states that “Cambodia runs on science. Let’s make that science Cambodian!”I think that’s such an important goal to pursue. There’s so much promise amongst the Cambodian youth to make an impact on both their own country and the world as a whole, but in order for that promise to materialize students need to realize the opportunities that are available.

At the fair, students could learn about robots, bugs, 3D printers, physical therapy, and so much more. Over the course of the fair, nearly 20,000 students had the opportunity to be inspired by ways they can improve the world with various STEM disciplines; just as importantly, they learned that science and engineering can be fun. I love that I had the opportunity to help inspire thousands of students, and I know that because of events like the science fair Cambodia is becoming a better place. Without a doubt, being able to be part of that impact makes my time at the science fair the most rewarding thing I’ve done in Cambodia.