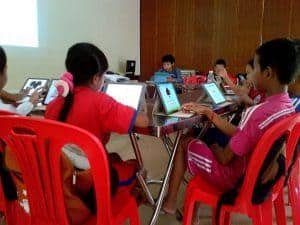 In the wake of our recent project with volunteers from Box as arranged by Team4Tech, the JWOC teachers have been making the most of the new tools and resources available to them, such as the learn-to-read program Monkey Junior created by a company named Early Start. Equipped with a new repertoire of tablet-based apps they are now able to deliver much more engaging lessons for the students attending our Free Classes at JWOC. These students generally come from households which are unlikely to have any computers or smart phones in their possession. Providing them with the opportunity to develop not just their language learning skills but also their kinesthetic capabilities and collaborative abilities.

Teachers Kimchhay and Dany have been especially active in using Monkey Junior with their younger students. As well as reinforcing the students understanding of key vocabulary it also allows students to hear words pronounced correctly by native speakers. Speaking to Kimchhay after his class he was especially enthusiastic about the way in which the app brings together vocabulary flashcards and pronunciation with sentence construction and developing phonetic awareness. 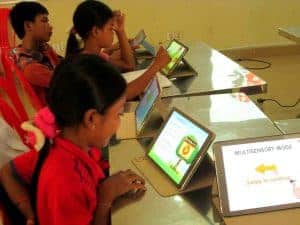 Dany used the wireless connection to the projector to demonstrate to the students how to work their way through each stage of the course and then distributed tablets among the students so as they could work in pairs to complete two levels of the colors section. She explained that after playing with the app herself for a while it was easy for her to identify which level would be suitable for her class. She also explained that she preferred it to several other apps we have piloted as its user interface makes it easy for students to learn independently, allowing her to spend more time with those students in need of extra support.
The smooth integration of educational apps into existing educational environments is never a straightforward process but with Monkey Junior we are happy to report that teachers and students alike have integrated it into their classes within days of discovering it. While such apps can never replace our invaluable teachers they can be great resources for supplementing and building on what students already know so we certainly hope to be able to make full use of the range of courses in apps such as Monkey Junior over the next few months. 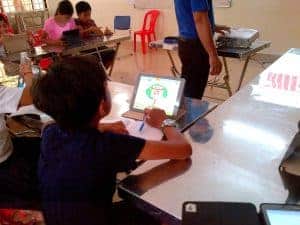