On Thursday 24th March 2016, JWOC was delighted to welcome two Team4Tech leaders– Julie Clugage and Danielle Martin – and ten Box volunteers to JWOC. We set them up with fruit and water and then did some icebreakers and introductions for the rest of the morning. After a team lunch at a nearby restaurant we had an hour-long session in the early afternoon exploring the schedule for Friday-Sunday as well as the project aims, the sub-teams and their goals. Then the Box volunteers went out on a tour with Josh and 3 scholarship students. Makara showed them around the squatters’ village then they went up to USEA for a tour of the campus, before returning to their guesthouse to take stock of their first day together in the heat of Siem Reap and the immediacy of JWOC. 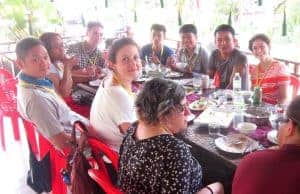 Friday morning we did a bit more work with the volunteers and sub-teams in the morning then they all spent the days in meetings and observing lessons. They really enjoyed being in the classrooms and seeing the teachers and students in action. The volunteers priorities were generally preparing for the workshops at the weekend, based on ideas developed in the weeks prior to coming to Siem Reap, Some of this involved working out what was actually happening in JWOC –  in the classroom or in the office – interviewing the relevant JWOC staff and proposing ideas to the staff. The volunteers seemed pretty energised at the end of it, although some of them were faced with an evening making changes to draft presentations and workshop plans!
Saturday morning brought the first of the workshops, with good representation from the scholarship students with numbers never below 30 and generally closer to the 40 mark in attendance. The workshops took place in our recently wifi-enabled, newly furnished classrooms A and B, with students now sitting in groups of 4-6 around large tables, a classroom set-up more conducive to the communication and collaboration skills we hoped the scholarship students would be working on throughout the day.
First up were the 21st Century Skills and Design Thinking sub-team, and although the nomenclature might not be the most wieldy, the ideas espoused were to form the foundations for all of the workshops. Ideas of critical thinking and creative problem-solving were defined and simple demonstrations of every day uses of such skills were explored. The workshop participants were asked to consider the importance of design in everything we do – from the shape of spoons to the workings of large engines – and then led through the different stages of the Design Thinking process. Solenne and AlanaVenosasked the students to apply these stages to the following challenge: design a better bicycle seat for a defined set of users. After interviewing other groups (the ‘empathising’ stage), students defined the task for themselves then set to work brainstorming (or ‘ideating’) and prototyping their proposed models. The finished products were displayed around the room and students invited to question and comment on each other’s designs – the closest we could get to the ‘test’ phase. 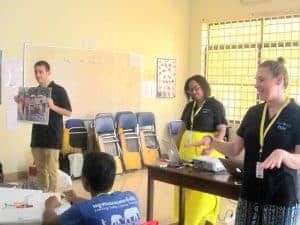 After lunch the scholarship students were introduced to the projectors that are part of the investments being made into JWOC’s IT infrastructure. This session was led by Alan Leung, who is part of the SIMS sub-team working behind the scenes to train JWOC staff on how to use a piece of software called Airtable to better manage the copious amounts of data we gather about the beneficiaries we work with in our different programmes. Then Sumat Lam greeted his audience in some well-received Khmer and explained his ancestral ties to Cambodia and delight at being able to return for a third time to his parents’ homeland. He discussed some basic ideas about digital literacy, including the ways in which every teacher can teach digital literacy just by incorporating any smart technology into the way they deliver lessons. The final presentation for the day was about the tablets which are such a huge part of this phase of the engagement between JWOC and Team4Tech. Alex Reynolds explained about some simple functions which will help teachers more effectively control their students’ use of tablets in the classroom, including a type of parental control app and some of the basic tenets of sharing files online. Then it was time to draw the curtain on the day’s interactions and for the workshop participants to disperse in their different directions, tired but with heads full of new ideas and perspectives and looking forward to another day of developments and revelations.

Sunday’s focus was on educational technology. The three subject-specific sub-teams took the lead on leading scholarship students through a range of different tablet tools and apps which could be used to create more interactive and dynamic classrooms. From simple whiteboard tools and voice-recording games to curriculum-length English teaching game-based apps the morning session was a crash course in the potential that devices such as the tablets have for accelerated learning and sharing opportunities in classrooms. From scanning the night sky for Orion’s belt to making videos based on interviews with each other via a quick taste of some salty potatoes there was something for everyone to engage with as Nate Schlein, Lauren Swartz, Jasmin Pamukcu, Matt Jones and Kelly Halamekrolled out multiple options for all the different subject teachers who were in attendance. 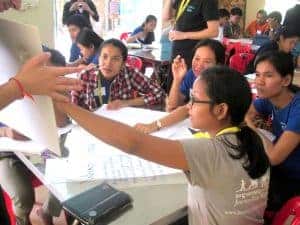 Having learned so much over the previous three sessions, Sunday afternoon brought the turn of the students to apply their learning. Alex got them viewing and uploading documents in google drive then Danielle brought them through a design thinking lesson planning task, with scholarship students sitting in small groups depending on their experience and area of expertise. The aim was to develop a lesson plan which incorporated a selection of activities and apps from the weekend’s workshops. The Science team came up with a new Astronomy lesson while General English teachers created review lessons for their students ahead of the end-of-term tests in two weeks. Digital Storytelling teachers worked on an interactive lesson based around effective interviewing skills and using voice-recording apps and the Digital Literacy concocted a lesson plan whereby students would learn how to create an email account and then make a video of that process in Khmer for other students. As any of the numerous photos from the weekend show, the smiles stayed huge, collaboration and creativity were the order of the day and everyone who participated came away from the day fully confident that they had not just learned some new information but whole new ways of thinking about teaching, learning and even thinking itself. 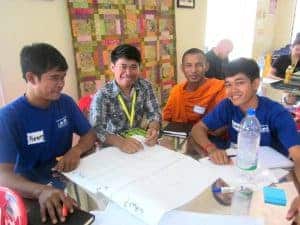 In the week ahead we look forward to putting these lessons into practice, as well as doing as much work as possible in the different sub-team focus areas. The bonds formed between participating staff and Box volunteers over the weekend promise to become stronger and lead to some interesting collaborations and developments during the remainder of their stay with us here at JWOC. A massive thanks to them all for their efforts and commitment, as well as to everyone who attended the workshops for their energy and determination to understand and learn.