Justin looks back at his JWOC activities

Students from West Point recently came to volunteer at JWOC. In their blog posts they explain about what they did and what they learned…
From the moment I was told I would have the opportunity to go to Cambodia I was excited. The prospects of a new culture, new people, different food, and a different language had me thrilled. However it wasn’t until I got to Cambodia and started working with Journeys Within Our Community ( JWOC) that I realized just how rewarding this adventure would be.
It was awesome participating in the normal tourist activities, but what I really looked forward to each day was my time working with the children and young adults in the Journeys Within Our Community. The conversational English classes were so much fun. I learned as much from the students in the class as they learned from me. I learned about the customs and traditions of the Cambodian people and at the same time was able to share my own customs and traditions with them. The students were capable of asking a seemingly endless amount of questions, and helping them with their English while answering their questions was more fun then you could imagine. We also painted a very colorful mural in order to teach the children the English alphabet. Painting the mural was fun in and of itself, but the crowd of children that surrounded us and were already putting the mural to use was awesome. 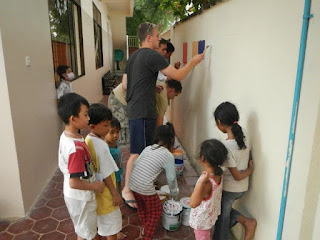 Though the classes were fun, the greatest reward came from teaching the self defense classes at a local high school and at JWOC. Though we prepared in advance, it was interesting speaking to the students through a translator and using more body language than spoken language to teach the lesson. Before the classes started I never could have imagined how excited the kids would be. They seemed genuinely excited, and tried to learn everything we could teach them and more. On top of this, it was amazing to see the looks of accomplishment on their faces. Most of the children had never learned anything about self defense, and the confidence that the classes gave them was the highlight of the trip.