Louisa shares what she has learnt about microloans

Louisa, a volunteer with Travel Aid, spent time with the Microfinance team to learn more about the impact microloans have in the communities around JWOC…

Economic development is a strong interest of mine and so when I arrived I
eagerly anticipated learning about how JWOC ran their microfinance
department and its impact on the local communities. After talking with
Nicola and Bora I was given the opportunity to observe the work of the
scholarship students one afternoon.

I soon found myself on the back of a moto, bumping along the dirt tracks with Horn an English Literature student at university. Kim, a fifty two year old grandmother greeted us both
cordially as we arrived to fill in an impact assessment form. She lived with her daughter, son in law and their children. As her husband had left her one year earlier she applied for a JWOC microloan of fifty dollars in order to expand her business of selling traditional Khmer cakes. She used the money to buy a bicycle so that she could sell her cakes in other villages not just her own. She successfully repaid her first loan and has given the profits to her daughter and son in law to contribute towards their daily expenses. 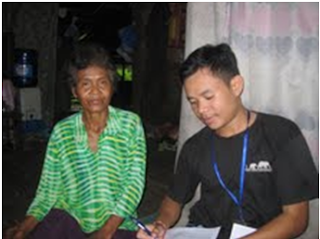 Horn carrying out the impact assessment questionnaire with Kim.

The impact assessment was extremely insightful as it allowed me to have a greater understanding of what her life is like on a daily basis which seemed to be fairly representative of others living in the local villages. The questions varied from how often fish, meat and
vegetables were eaten weekly to how often someone in her family gets sick,
whether or not they are able to afford the necessary healthcare and her
living conditions. Kim said that someone gets sick more than once a month
in her family and that she can afford the correct treatment only sometimes.
The assessment also included a breakdown of her total monthly household
income which astutely highlighted her financial dependency on her son as he
contributes 67% of her monthly income with the remaining 33% coming from
her business. She estimated that her net profit was $50 each month, which
roughly equates to $1.8 each day. The assessment form provided a clear
indicator of Kim’s quality of life through qualitative and quantitative
data which enables JWOC to easily assess the impact the loan has had on Kim
and her family. 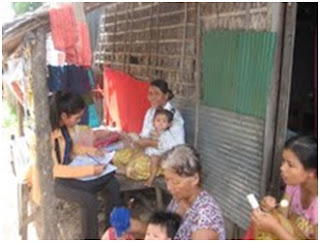 I also met a woman who had just finished repaying her
fourth JWOC loan which she first used to expand her food stall outside the
Children’s hospital in Siem Reap. The hospital does not offer food to
either the patients or the staff so the loan enabled her to offer a greater
range of food using better cooking facilities and a greater section of
ingredients. Her second and third loans were used to diversify her business
to sell clothes for the mothers, babies and children staying in the
hospital. JWOCs microloans are only given to existing businesses to
minimize the risk of defaulting and most tend to be small roadside stalls
selling food such as fruits, noodles and rice soup. 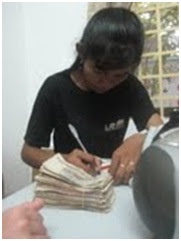 Completing the paperwork and cash counting after returning to the office.

JWOC’s microfinance project began in 2006 and since then it has helped over four hundred and
seventy families receive loans. There is a huge demand for basic loans as
many of the villagers do not have access to commercial credit. Most banks
require a minimum amount of money in order to open an account along with a
form of collateral which is often not possible in the local villages as
they have weak, if any property rights to use as collateral. Commercial
loans also require a high level of literacy in order to fill out the
paperwork and are only likely to accept applications with those who have
formal employment.

Directly visiting the individuals who had received the loans and observing how the microfinance department is run in JWOC has crystallised my interest in the role of microloans in poverty alleviation. JWOC’s form of microfinance has proven to be extremely successful so far in the local communities to help people help themselves in a sustainable long term manner that I hope will continue to exist with the support of continuing and new donors.