Late November / Early December 2009: Shannon Ferrier, a JWOC volunteer, spoke to scholarship student Sarann and accompanied him during his weekly volunteering with the Clean Water project. Here is what she wrote about her experience…

This morning I met Sarann, a 22 year old scholarship student at JWOC. In return for his scholarship, he volunteers every Saturday morning with JWOC’s Clean Water Project. He is in second year at University, majoring in Finance.

Sarann comes from a large family- he has 8 brothers and sisters. When he graduated from high school, he worked as a security guard at the airport. After hearing about JWOC from a friend, he applied, passed the test and was accepted as a scholarship student. He leads a very busy life. Six days a week he goes to university from 6 to 9 pm and 5 days a week he volunteers with another NGO from 7.30 to 5 pm. On Sundays he studies, does homework and washes his clothes.

We left JWOC about 8.15 on Saturday morning—three of us in a tuk-tuk and most of the students doubling up on motorbikes. It was a 25 minute ride to the village of Branat. When we arrived at the village chief’s house we found several villagers waiting for us, and large reed mats laid on the ground where they could sit or squat. A table held a new ceramic water filter and a large bowl of water ready for the demonstration. 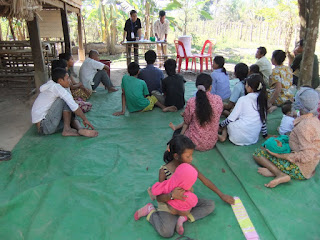 Attendance was taken. We were told that it’s very important that one responsible family member attend the demonstration. If the filters are not properly cleaned and maintained they won’t provide the clean water necessary for good health.

Sarann demonstrated each step and assembly of the filter – immersing the filter in water, scrubbing it with a rough pad, then carefully rinsing it in fresh water. All parts of the filter were washed, scrubbed and rinsed before assembly.

When the demonstration was finished, the students patiently repeated the whole procedure. They then asked for volunteers from the assembled villagers to step forward and repeat the procedure a third time.

While the demonstration was going on, the project’s assistant manager, a former JWOC scholarship student himself, watched the audience carefully. Later, he took aside two who he felt were not watching or understanding what was going on. When they were questioned, it was apparent that he was right. They were told to send another family member to the next day’s demonstration. They did not receive a filter that day. 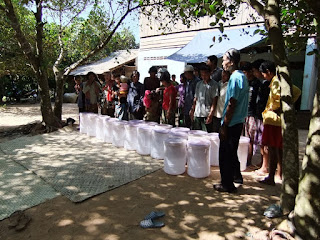 At this point about 20 filters were carried out of the chief’s house where they had been stored. They were given to the villagers who strapped them into large baskets on their bicycles or hoisted them to their shoulders and headed for home.

In a few weeks the scholarship students will be back to inspect the filters, take water samples for lab testing and provide further instruction on personal hygiene – particularly handwashing and teeth cleaning. Even though the instruction was in Khmer, it was very easy to understand as I watched the demonstration.

I learned from Sarann that before he became a JWOC scholarship student and volunteer, he had known nothing about the importance of personal hygiene and clean water. He said this had been very helpful to him and that he had shared his knowledge with family and friends.

It was an educational and very inspirational day for me.