The challenges and rewards of volunteering in Cambodia

Students from West Point recently came to volunteer at JWOC. In their blog posts they explain about what they did and what they learned…
Before this summer, when I thought of vacations what came to mind was usually drinks on the beach or camping in the wilderness. However, this summer I had to opportunity to visit Cambodia for 3 weeks with a few of my classmates from West Point. During our vacation, we did the typical “touristy” things such as visiting the ancient temples and trying out our bargaining skills in the market. But what set this vacation apart from others that I have taken is that our group had the opportunity to work with the non-profit organization, Journeys Within Our Community (JWOC). While at JWOC, we were able to participate in many of the different areas of the organization.
The first thing we did when we arrived at JWOC was to take a walk into one of the local villages right behind JWOC to see some of the people that JWOC supports. Visiting this village really put into perspective JWOC’s motto of “See a problem, Solve a problem.” I had never been exposed to how the poor live in third world countries, and JWOC’s mission to support these villages to give them opportunities that they usually do not get definitely goes a long way. 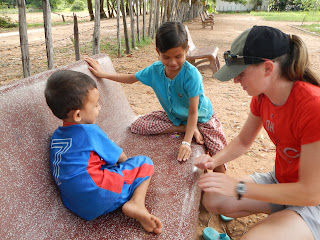 Most of the work that we were involved with while at JWOC were the free classes offered. We spent most of our time with the conversation English class. Here we got to help the students practice speaking English with native English speakers, something they are unable to do very often. This was a lot of fun because all of the students are so eager to improve their English so they can do well in the universities or career fields. I had a blast getting to know the students that we worked with in that class. Sometimes I felt bad for the teacher because the students just wanted to talk with the foreigners instead of listening to the lesson. We also joined a children’s English class a few times, which was a little harder for me but still just as much fun. The kids don’t really care who we are, they just want someone to play with and love anyone who does. 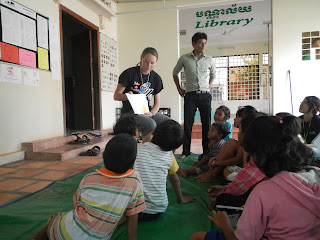 We also joined an art class, which involved much younger children than we had worked with previously. Most of them spoke very little English so trying to communicate a craft was a challenge but I think I had about as much fun as the kids making spider webs with them.
We also had the task of teaching Self Defense classes for anyone who was interested. We had all taken self defense classes at West Point and knew it pretty well, but trying to explain it in a way that the class would understand and could be easily translatable proved to be the real challenge. I was definitely nervous heading into our first class, but it turned out great. The class even demonstrated every move in order at the end of the class, which showed us that they understood it all. There was never a moment in any of the classes where there was not laughter or smiling. That was rewarding in itself to see them all having a great time. And I have loved walking into JWOC since then and having one of the students run up to me to practice their moves some more. 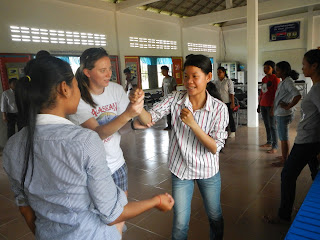 We joined the Clean Water Project on a Saturday to follow them to some schools and see the wells that have been installed or maintained by JWOC. Being an environmental science major, I loved this part of the trip. We went to three rural schools and checked on the wells as well as interviewed a teacher and student on how the well works and hygiene. The best part about the Clean Water Project is that it is run by the students that JWOC has given university scholarships to, as a way to pay back to JWOC and the community.
Overall, my experience working with Journeys Within Our Community has been amazing. It is hard to forget the children’s laughter as we play monkey in the middle, a child that won’t let go of my hand during arts and crafts, or the smiles that greet us every time we walk into a conversation English class. I have had an awesome time on my trip to Cambodia and I know it will stay with me when I go back to the United States.
-Susan Kiernan