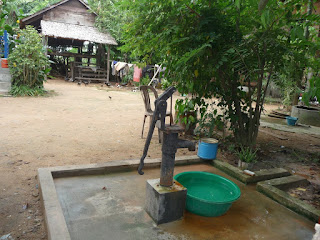 As volunteers, our role within the JWOC clean water project was to facilitate the work of the scholarship students and provide them with support during a new project. It turned out to be a rare opportunity to work closely with both the local students and local villagers, and many of us felt privileged to be in this position to be so involved in a grassroots development project.

We worked on a completely new project with three groups of households in Kvean Village which is located near the Angkor territory. In a way we were incredibly lucky as this meant that we were able to see the impact of our work on the village. The first visit to the village was for many volunteers their first ride on motorcycles! However, having overcome the initial adrenalin rush of placing our lives in the (very safe) hands of the scholarship students, passing sparkling emerald paddy fields and navigating the bumpy red roads of Siem Reap to the village; disturbing the ubiquitous featherless chickens and the odd placid buffalo, we arrived at the site where our work was to begin.

Having been briefed in scouting techniques by Andrew, we divided into groups to explore the village and scout for existing wells, taking note of their model, condition and locations. Our further objective was to find suitable positions to build new wells that could benefit the village. The wells that we saw ranged from abandoned holes in the middle of fields to working hand-pumped pipe wells funded by Japanese charities. Although many wells were in poor condition, what struck me the most was the pride with which the villagers demonstrated the workings of their well. They also didn’t seem to mind us taking notes, photographs and GPS readings while scattering animals and children in all directions. 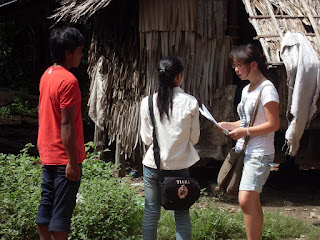 From working at JWOC, the drive and dedication of the teams there to create change as effectively and quickly soon became clear. Within 2 weeks of our initial visit, all the information gathered enabled JWOC to employ a local well man to repair all the broken wells in the village, and new wells were constructed where they were most needed and accessible. Visiting the village every weekend meant that we were able to communicate directly with the villagers with (huge amounts of) help from the scholarship students. Although many in the village already had access to water in some form, there were those who clearly benefitted from the JWOC’s speedy work. In particular, there was a family with two very young children and a pregnant mother. When we arrived, they were drinking and washing using dirty grey water out of an exposed hole well, which completed negated any of the mother’s efforts to keep all their water containers and utensils meticulously clean. By the time we left however, the family were enjoying the benefits of a new and deep hand-pump well that spilled clean water. Although we could not communicate in language, it seemed clear from his smiles that the father was overjoyed as he showed us that it worked. This personal level of work that JWOC carries out does not appear to be a one-off.

In addition to the well maintenance and building, JWOC also worked sought to distribute ceramic water filters to the village and planned to carry out training in hygiene and teeth-cleaning with the village community. In order to assess the necessity and impact of such work, we went out to Kvean Village with the scholarship students to engage the villagers in surveys relating to personal health, hygiene and lifestyle. Not being able to speak Khmer was frustrating as we were not able to connect with the villagers on the level that the scholarship students were able to (although the odd paper crane seems to cross multitude of language barriers with children), and though we asked highly probing questions ranging from the frequency of teeth-cleaning to diarrhoea, and asked for demonstrations of hand-washing, we were welcomed with nothing but patience and tolerance. The JWOC scholarship students seem to play a huge role in making both the villagers feel comfortable and the JWOC approach non-intrusive. 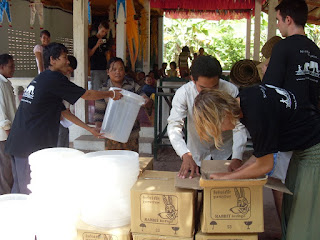 On the 2 days of water presentations, we all congregated at JWOC at 7am in order to practice the presentation routine with the JWOC students before the real thing in the village. That weekend, the rigmarole of soaking, drying, washing and more washing of water filters was presented with success and water filters were handed out to each household in the 3 groups of Kvean Village. As we walked around the village to check the progress of preparing the filters, I noticed one family had soaked their filter with that evening’s vegetables for dinner. Multi-tasking indeed!

Working on the clean water project at JWOC really showed how much more effective such work is when local volunteers are engaged, and how efficient such an organisation can be. Although many in the village still live in difficult conditions, within a few weeks JWOC were able to provide access to clean water. This process can clearly be replicated in many more areas of need around Siem Reap. In the month that we volunteered, JWOC allowed us a privileged insight into how such programmes are carried out and we hopefully helped (a little). Thank you to Camilla, Andrew and all the JWOC scholarship students for your tireless work, and for making us feel so welcome while working at JWOC.